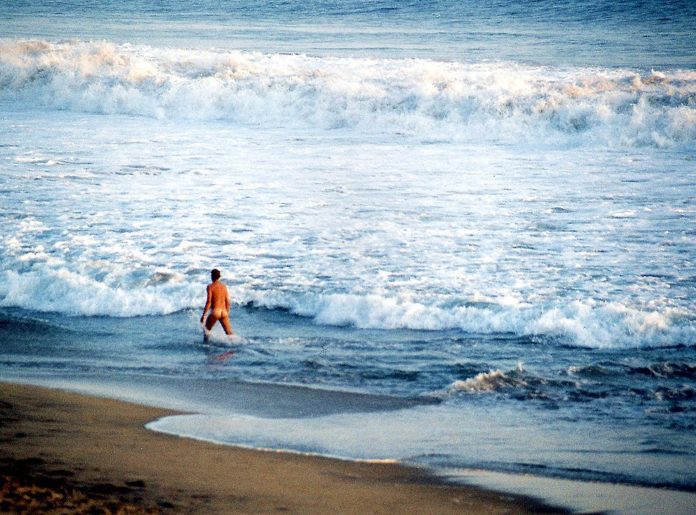 It was Halloween 2018.  My friend, Beck, took me to enjoy my first nude beach experience in Pismo, California.  Needless to say, it was a disappointing one.  Nude generally means “no clothes, right?”  Guess not.  I thought I would finally be at a place that I could feel open and free.

Getting down to the beach from the street atop is quite the challenge.  Sometimes a rope is necessary after a steep incline, in order to get to the beach. I noticed at the end of the rope that out of five people in sight, four of them had clothes on.  So far this is not what I expected. From what I can see so far, there are more clothed bodies than nude ones.  After perusing the beach, I spotted a couple.  The man was lying on his back while the woman was giving him a ‘hand’ if you know what I mean.  I’m still pretty sure that’s still forbidden in public, even at a nude beach.

Arriving at the spot Beck was looking for, we decided we would lie down and soak up some sun. I noticed another couple about ten yards away lying on their stomachs.  The man closest to me began to get up, and I saw that both were men. Because one of them had long hair, I had mistaken him for a woman, but it was becoming clear that there were NO women at this beach.  At least not that I could tell. Then, to add to my curiosity about everything, the man that started to stand up, put his bathing suit on to go into the water.  What???? So much for my first experience so far.  Not that I’m a voyeur, but it would be more comfortable if others were partaking.

The Next day, I thought I would give the nude beach experience a second go-round.  Maybe yesterday was just a fluke, right?  I arrived earlier than the previous day.  I was one of around 10 people on the beach.  It almost looked more like a semi-private beach.  A couple of people were walking by me on a stroll.  They were clothed.  There was a couple further down the beach. A man and a woman.  He was nude.  She wasn’t.  She, too, was helping give him a ‘hand’ not so discreetly and followed it up with a mouthy finish. I am the first one to preach that nudity isn’t about sex, and it irritated me I was being proved wrong in two instances.

The beach started to get crowded, as people were filtering in small packs.  At that point, there were approximately five people of fifty that were nude, besides myself. There was one topless woman with her dog, which made me feel better about the fact that I brought my Lil chi, Mimi, with me that day. I was thinking about talking to two men walking by us and maybe ask them if they understood why this was a nude beach.  I wanted to document my experience on video, but I knew that would be frowned upon, and is usually strictly forbidden. I don’t understand why, since everyone was clothed anyway. After looking around a bit, I notice the people to the right seemed closer to the age of college kids, just there for a peek-a-boo. Only the area to the left was actually the nude beach.

Then… wait for it…… OMG…. There was finally a woman that was fully nude.  Finally, a woman on the nude beach was partaking.  The first one in two days. I honestly think I have seen more skin on a regular beach.

So, what I have concluded is this… There are no nude beaches in the USA.  While there should be three options: clothing required, clothing optional and nude.  The latter does not exist.  I declare this to be true because there are no beaches that REQUIRE a person be nude.  I understand in Europe, beaches aren’t called “nude beaches,” rather they allow one to be nude if they choose. So technically, in America, there are ‘clothing required’ and ‘clothing optional’

Trying to be as respectful as possible, I would like to give a question to ponder…

It is normally the case that men wear shorts to cover their “privates” but go topless since they have nothing to hide….

So, why is it that women go topless instead of bottomless?  There isn’t really much to show on the bottom, while a lot more to see on top.  Doesn’t it seem a bit backwards?

Photo by Blair Stirrett, CC BY 2.0