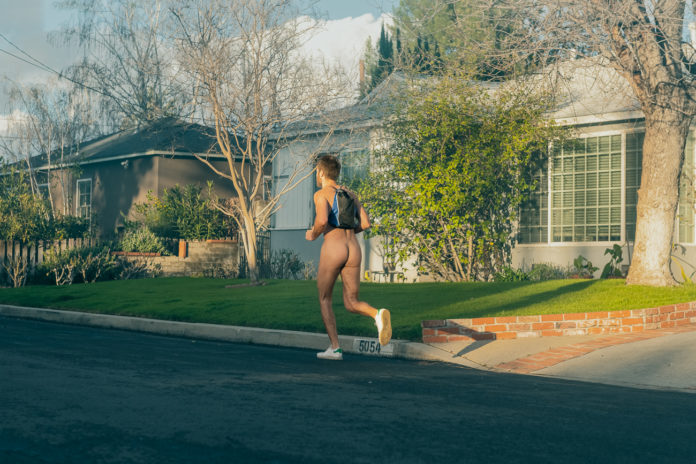 If you’ve been a reader of this site for a while, you may know I’m French and I love being naked as much as I can. Those two characteristics are shared by the adult performer Doryann Marguet, and the comparison stops there. Doryann is French and does not understand why nude is seen as rude, as he says “I was trying to show to the American people that nudity is not something rude.” Well I think his message goes beyond America.

Now because he works in the adult industry, you may think this is going beyond the true spirit of naturism, but Doryann is pretty clear: “Nudity and sex are two different things. Nudity does not mean sex and sex does not mean nudity.” So this is said in a very clear way. The interview ends with this very positive note about naturism: “One of the rules of naturist places is to be tolerant with each other and not to judge other people’s bodies.”

The whole photoset with Doryann can be found here. I particularly like the pics when Doryann is jogging (above) or having a drink in a bar (below). The first time I saw the pictures, I found them beautifully shot and so normal. The question “so what?” came to my mind. And it’s a valid question when you consider nudity as a totally normal state. Now, if you feel that simple nudity should not come out in the streets or in public places, the question may seem weird, because, those are not situations that should exist. So, why? Why should those situations not exist? Because nudity is not a public state, it’s a private one! And what if it could become public? Don’t say it should not, just imagine it could because the human body is just a human body with no sexual connotation. Then, those situations become fairly normal. Actually, when a world naked bike ride happens or the race Bay to Breakers take place, there dozens of nude bodies moving along with clothed bodies, and. although some people may found this weird, it does not result in public outrage…

OK, the previous paragraph may seem confusing, but it’s actually very simple when you think about it. So let’s rewind in a simple manner, with a simple assumption: nudity is normal. Therefore, all the pictures of the series are normal. This means, they are actually beautiful pictures because well taken, but show nothing than normal human beings. Now, for society, the reality is the opposite of the previous assumption: nudity is not normal. Therefore, all the pictures depict abnormal situations where the man should be clothed. Yes, but, and this is the purpose of the set, all the situations are normal, every day life situation. The only abnormal element is that the man is naked. Going back to the assumption, if nudity is normal, then the abnormal element disappears. Now, with the final thought: what makes nudity abnormal? Well, its obvious association with sex and sexual excitement. If you make simple nudity normal, keep sex private, and dissociate one from the other (associating them is learned not innate) then simple nudity can become public and all the pictures are completely normal, which I truly think they are.

But enough about this, nudity is normal, nudity is natural, nudity is awesome, and naturism is an incredible lifestyle. If opportunity was offered to be able to wander naked everywhere without risking being arrested, would you do what Doryann is doing in those pictures? I know I would and the I think the world would be far different from what it is today, for the better. I would love to read your comments and thoughts about this in the comments below.

Pictures Copyright 2019 Tommy+Alan | All Rights Reserved, used in this post with exclusive permission from the authors