Naked yoga is exactly what it sounds like. So what’s with all the hype? While naturism is still a relatively fringe pastime, naked yoga seems to be rising in popularity in recent years, with even celebrities and influencers declaring their love for it. While the latest craze makes it sound like little more than a trend, nude yoga, also known as Nagna Yoga, is a liberating form of the practice that has actually been around since ancient times. The reported benefits by throngs of dedicated practitioners worldwide are clear evidence that naked yoga is no passing phase – it’s here to stay!

Yogis who love practicing nude yoga claim that the element of nudity enhances the already impactful benefits of yoga itself, including improved strength and flexibility, greater self-awareness and mindfulness, and decreased stress and anxiety. According to True Naked Yoga, an instructional Naked Yoga streaming service, their community members report the following benefits:

As many who practice naturism are aware, spending more time in the nude, especially when paired with powerful physical activities such as yoga, is a wonderful way to normalize and desexualize nudity. Doing so can help to release feelings of shame and negative body-image when practiced consistently. True Naked Yoga strives to offer their subscribers greater access to this incredible array of benefits, no matter where they are in the world. They launched their subscription service in 2020 when so many yoga studios around the globe were closing due to the pandemic, and since then have managed to amass thousands of community members from 82 countries.

Their extensive library of instructional yoga videos and meditations are suitable for all-levels of yogis, from absolute beginner to advanced. They also offer a diverse range of styles, including Hatha, Ashtanga, Yogalates, and Yin Yoga.

From Beginners to Experts

Although I’m not totally new to Yoga, I’m an amateur yogi. Emily, from True Naked Yoga, reached out to me a few weeks ago to test the service. I immediately accepted as I’m a strong believer and supporter of naturism and all nude activities. After doing a tour of the site, I earmarked the Morning Wake-Up Yoga with Meagan (it’s free!) to test it the next day. I loved it! A great way to wake up gently and stretch your body.

As I’m in naked workout, I wanted something that challenged my body and muscles a little bit more, so I followed Core Strengthening Planks with David. The 13-minute series of poses challenged my core, arms and shoulders, and it’s one I will definitely add to some of my workout routines.

Then, what surprised me was the encounter of yoga and HIIT (High Intensity Interval Training). To me HIIT Yoga was an oxymoron. It’s no longer after having tried the 30-minute HIIT Yoga Sculpt with Mel. I had a good sweat and felt my muscles working like never.

When you wander around the True Naked Yoga website, you realize a few of things:

True Naked Yoga is a testimony of how awesome naturism is and why nudity should not be seen as a sexual state. Naked and Happy is very happy to start a partnership with True Naked Yoga, as we share the same philosophy about nudism and naturism. Whether you start yoga or want to improve your practice, True Naked Yoga is you go-to service on the web! 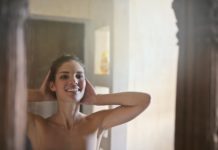 I love being naked, and no, it’s not sexual…